I Ate the State – Pacific County

Welcome back! It’s been far too long… I know we’re not running at full-capacity yet, in so many ways, but it feels like things are starting to look up again. Similar to spring flowers seeking the sun, I feel us starting to stretch our limbs, looking hopefully to the parting clouds. And to perhaps begin … END_OF_DOCUMENT_TOKEN_TO_BE_REPLACED

I Ate the State – Special Edition: I Ate the Neighborhood

Please join me for a jaunt around my Bothell neighborhood! END_OF_DOCUMENT_TOKEN_TO_BE_REPLACED

Greetings! As many of us are currently doing, I’m sitting in my living room, contemplating the state of things. I’ve been thinking about what makes me strong and what makes me weak; what’s truly important to me and what drama I might’ve put too much time towards. I’ve been rethinking my usual, “I enjoy hanging … END_OF_DOCUMENT_TOKEN_TO_BE_REPLACED

I Ate the State – Island County

Happy New Year from I Ate the State! I’m quite certain it’s going to be a good one – and chock full of Washington State adventure. To start the year off in coastal style, I’d like to share my recent adventures to the beautiful shores of Island County. Comprised primarily of Whidbey and Camano Islands … END_OF_DOCUMENT_TOKEN_TO_BE_REPLACED

On the heels of lamenting the Viaduct loss, I decided to take part in the Tunnel to Viaduct 8k Run/Walk event on February 2nd. It was a fascinating, nostalgic, and close-up goodbye to the Viaduct and a (mixed emotion) hello to the new tunnel. The event attracted 29k participants and was the largest running race in Seattle history. It was a once-in-a-lifetime event and I’m extremely happy to have been involved. Even if it did involve getting up super early, parking way up on Queen Anne and walking down to Seattle Center… And walking back up Queen Anne after the race. (Ouch) Good ol’ Seattle parking!

My original intent was to actually run the race. I’ll admit to maybe running a couple hundred yards before deciding I’d much rather be enjoying the details and taking a few photos. I’m so glad I had the chance to get a last glimpse of a huge part of my Seattle memories…

Participants queued at Seattle Center and each wave made its way over to the entrance of the new tunnel to start the race. 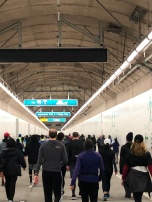 Can’t imagine they’ll be leaving these in the tunnel…

Exiting the tunnel. Good thing there was no toll that day!

Looking back on the city after exiting the new tunnel

After exiting the tunnel, we were routed through Pioneer Square and then onto the Viaduct. It was amazing getting the chance to walk on the Viaduct and take in those classic Seattle views. I’m going to miss those… 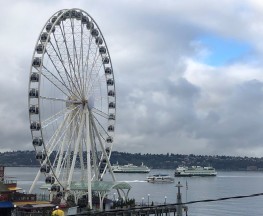 Such a classic Seattle view! 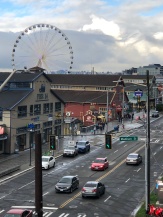 Weird to see the divider gone! 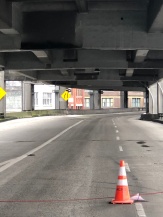 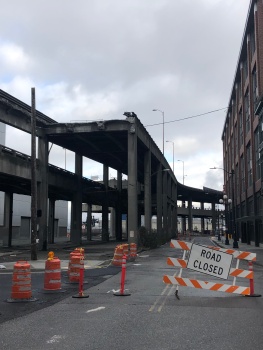 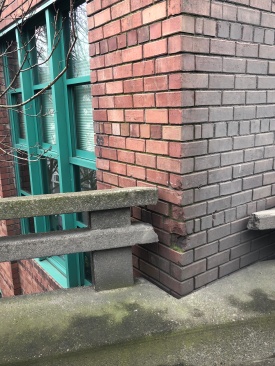 The Viaduct really was a connected part of the city!

Walking through the Battery Street Tunnel was eerie, exciting and very cool. It felt like I was in a scene from the John Carpenter classic, The Warriors. It was also pretty crazy to see and feel just how aged the tunnel really was.  It wasn’t that long ago thousands of cars were passing through every day!  Yowsa! :-} 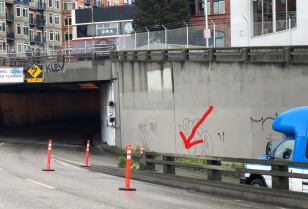 The exact spot where I was rear-ended while at a complete stop. And the beginning of all my back issues… YEAH! 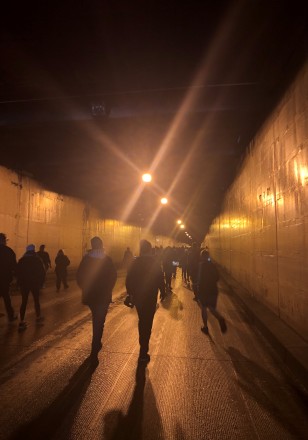 Warriors, come out to play!

Hope no one needed to make a call… 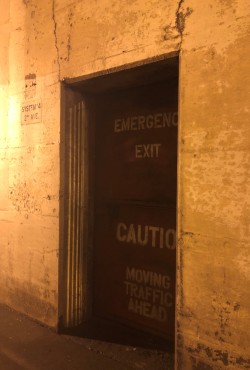 I got a medal!! (Well, I purchased one anyway…)

Another I Ate the State Special Edition is coming very soon: The UK, featuring London and a lot of Scotland – with special guest, Reykjavik! And then back to regularly scheduled Washington State with a Grays Harbor County feature… Please stay tuned!!

I’ve been a bit misty-eyed about the Seattle viaduct and its impending doom. So many Seattle icons have fallen to the march of time and progress, but this latest loss is hitting me hard. From my earliest childhood memories of family Seattle visits, the viaduct was always a thing of wonder, mystery and big city dreams. The double-decker wonder of it amazed me and the chance to peek into the lives of the big-city dwellers while driving south was always mesmerizing. And all of the shops, wacky parking, nooks and crannies located underneath on Alaskan Way were always a wonderland to explore… The viaduct always inspired me and motivated me to “move to the big city someday” and I’m so terribly sad to see it go.

This loss of yet another Seattle icon has inspired me to put together a list of the classic places, people and things I’m missing from Seattle days gone by. (Some only recently departed!) I know I’m forgetting a few…

An old picture I took of Leilani Lanes

Please join me in a collective sigh… Give it up for bygone Seattle! Are there any spots you’re missing that aren’t on this list? I’d love to hear from you!  Misery loves company, after all…

It’s going to be interesting to see what transpires in Seattle in the coming years. I hope we can keep our remaining favorites untouched by corporate overlords. In the meantime, I plan to continue profiling places to visit and things to do in Washington State and of course, our beloved Seattle. Please keep following I Ate the State for the goods. I’ll be returning to regularly scheduled programming soon with a visit to Grays Harbor County – And a special edition visit to Scotland! Do join me!

Please check out these additional I Ate the State adventures!